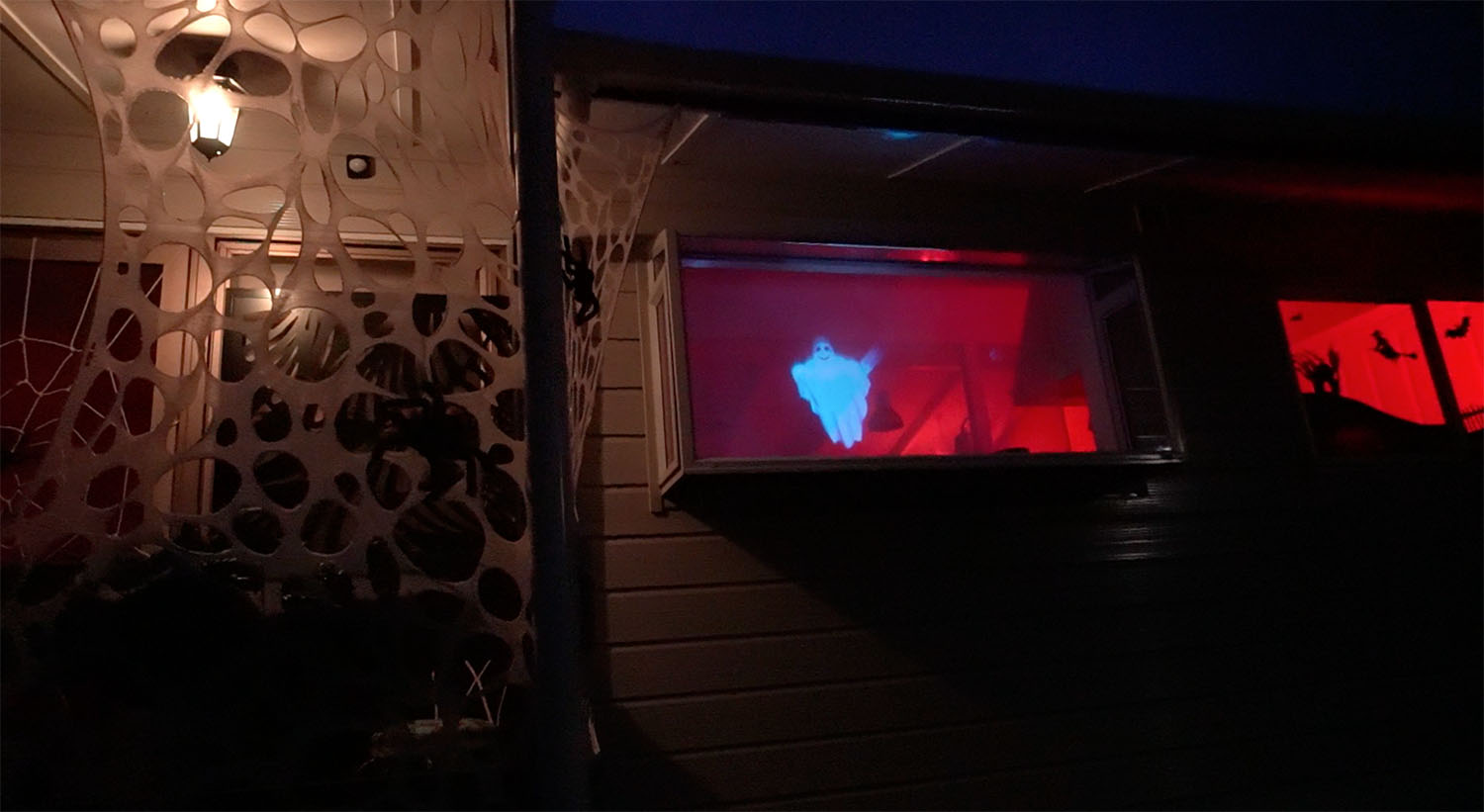 It’s Halloween and I’m excited.  Our house is all decorated, and this year Andy has gone all out. He had the week off work and he’s spent a good portion of it thinking about and creating decorations.

Now, we just need the weather to hold so that we get some trick or treaters.  We have downloaded a QR code so that they can scan when they come.

Want to see our decorations and how we made them?

There's a video of what it looks and sounds like at night at the bottom of this post so be sure to scroll down.

For the last few years we’ve used black paper cut outs on our windows with red lighting behind.

To make these decorations we simply downloaded some images from Deposit Photos.  We searched for Halloween silhouettes and there are all kinds of options.

Next, we printed them out at the size we required.

Then we roughly cut out the images and glued them onto black card.

We cut out larger parts of the images with scissors.  For the details we used a craft scalpel.

Then we simply stuck them on the window with tape.

We ran a line of LED lights across the windowsill and set them to red.

It couldn’t be easier, and this is a great way to get your kids involved in decorating.

Up until this year we have always purchased the cobwebs they sell in the stores.  The type that are wispy and thin.  The problem is that where we live, we get a lot of wind at this time of the year (she says as she looks out the window at a cold and stormy day), and the cobwebs blow away.  They also like to get stuck in my roses and it's a deadly endeavor to remove them.

We decided this year to try something new and reusable.  We purchased 20 metres of mutton cloth and tacked it up all over the front porch.

As we did this, we stretched it out and used sharp scissors to cut random holes in it.  It’s actually really easy to do and it’s much more sturdy than the wispy kind. When it’s all lit up in the evening, it looks great. We put a string of LED red lights under the porch so that they shine up onto the ‘spider webs’.  We also added some purchased spiders.

Spider Web on the Front Door

This was a last-minute addition to our Halloween decorations.  We did the video below and decided that we needed to fill this space.

To make the spider web we used some cotton cord that we had.  We cut the first piece long enough to loop down from the top left down to about the middle of the door then back to the right side.  We knotted it in the middle leaving a loop.  Then we taped the ends to each side of the door.

We took more cord and looped it through this circle in the middle to make the extending "arms" of the spider web.

We knotted some cord onto these 'arms' and then went around and around, tying a knot each time we crossed another piece of cord. It was actually almost identical to making my Spider in the Web pendant just done with cord instead of wire.

We added another furry spider to the middle of the web.

This is another easy project that the kids could be involved in.

Andy recycled the headstones we've been using for years and made a few new ones. These are made from plywood. He cut out the shapes, painted them white, added words if required and then used black boot polish to distress the headstones.

They look really great at night too as they catch the light.

This year we used a projector and some speakers to add some action to our decorations.  We pinned up some white chiffon over the main window in the kitchen, then we sat a projector on the island and projected out of the window. He used these animations by AtmosFX which are really fun and come with sweet little songs.  We didn’t want anything too scary, so we chose to go cutesy rather than scary.

You might want to watch the video of what this all looks like at night (turn on your sound).

I hope you’ve enjoyed this little tour. If you have, subscribe to my email list so that you can see what’s coming up for Christmas. You also might like to let me know in the comments section if you liked this project.