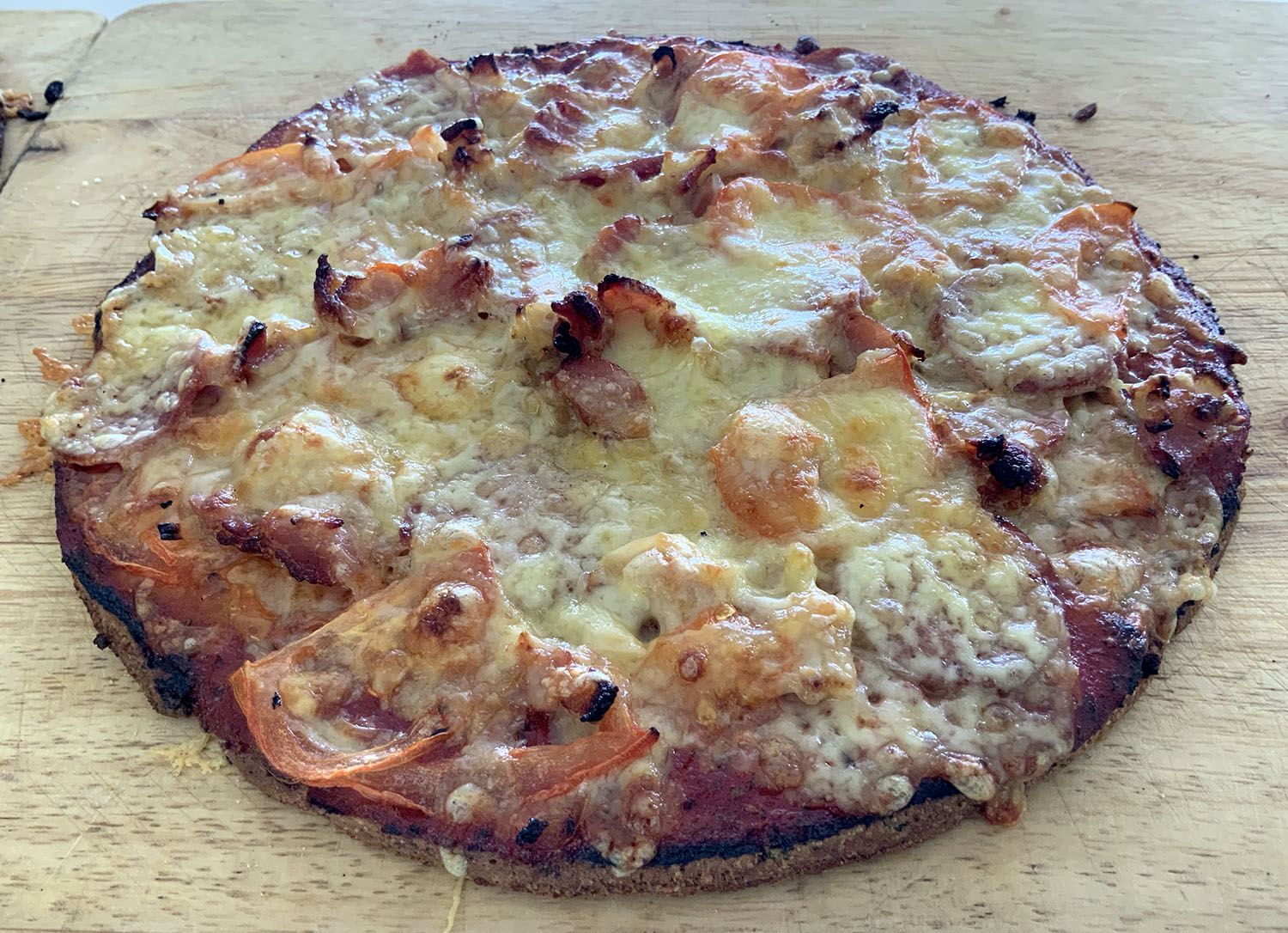 Who doesn’t love pizza?  I know we do. Now we can have guilt free pizza. Depending on the toppings you decide to use, it can also be gluten free.

This recipe is full of cheesy goodness and tastes amazing.  It actually takes less time to make than regular wheat-based pizza bases as you don’t have to rise the dough.  This recipe makes three dinner plate sized pizzas.

Carbs and Over Indulgence

Obviously traditional pizza is high in carbs and, if you're on a no-carb diet, this recipe is not for you as it does have 5.8g of carbs per slice. So the trick here is not to over indulge and you could stay in ketosis if you only had a slice or two. That's hard because this pizza is sooo yummy. If you really can't stop yourself then I suggest that you only make what you can eat by splitting the recipe into a quarter.

Having just said don't over indulge, I'll say this - it’s pretty unlikely that there will be any but if a miracle happens and you don’t use it all there are four options:

The last option is my choice. You can take one or two pieces out the freezer and take it for lunch anytime when you’re not feeling inspired to make your salad before work.

So, let’s talk about what’s in the pizza.

If you eat a Keto diet, you’re pretty familiar with Almond flour.  It’s in everything.  It’s low carb and high fat which is exactly what you’re aiming for here.  I buy mine from Moore Wilsons for around $16 per kilo (+GST). I generally buy two kilo bags at a time as we use a lot of it.

Psyllium is a form of fibre made from the husks of the Plantago ovata plant’s seeds. Sometimes it’s also called ispaghula. This plant is actually a weed. Psyllium is a bulk-forming laxative which means it soaks up water in your gut which gives its laxative action. Don’t be concerned that I have added it here – in smaller doses it doesn’t have a major effect. Having said that’s it’s actually quite good for you in other ways but I’ll leave that for you to research as this post is all about pizza, not laxatives!

I buy my psyllium husks in 1 kilo bags from Kerrindales as I use them a lot.  While I would prefer to use organic, they are twice the price.

A Word About Garlic Salt and Baking Powder

When I first went gluten free these two things tripped me up.  Most baking powder is gluten free it’s just something to be aware of.

Garlic salt is a bit trickier so make sure you read the label.  They can also be quite high in carbs if you’re going for a really low carb diet.  The good news is that you could actually leave the garlic salt out of this recipe if you desired.  An alternative would be to increase the fresh garlic by one clove.

I never buy pre-made pasta or pizza sauce - it's expensive and includes all sorts of unknowns. My answer to pizza sauce is simple - passata and dried herbs. All you do is mix them together and you have one mighty (and cheap) pizza sauce. I also use this sauce with spiralized zucchini for a quick and easy meal.

There’s always a bit of a discussion in our house about what’s going on the pizza.  In years gone by I used to pile them up with all manner of things but we have actually decided that we prefer them with less toppings and more flavour.  It also makes them easier to handle.

These days the staple is onions, garlic, bacon, tomato and pepperoni (one half the pizza).  I don’t like pepperoni, so it stays off my pizza! You might want to do the same if you are aiming for a gluten free version.

Put the mozzarella and cream cheese in a microwave proof dish or jug.  Melt for one minute then stir with a fork.  Melt for a further minute and stir again.  Repeat until the cheese is melted and well mixed.

While the cheese is melting, in another bowl, mix the almond flour, psyllium, baking powder, garlic salt, parsley, oregano, garlic and parmesan.

When the cheese is melted add the eggs and mix well. Mix the dry ingredients into it.  Knead the dough with your hands (be careful it may be hot) until it resembles dough.

Sprinkle some coconut flour on the bench and rolling pin.  Roll the dough out as thinly as possible.  If it splits or holes appear you can patch them up with pieces from the outside. When the dough is thin enough, place a dinner plate on top and cut around it. Roll/hang the dough over the rolling pin and move onto the prepared tray.

Gather the remainder of the dough up and repeat until you have two more pizza bases.

Bake the bases in the over for a few minutes until they start to brown.  You need to keep an eye on them – you want them to start drying out but not too much.

The nutritional information below is for the pizza base only as it will vary depending on the toppings you choose. 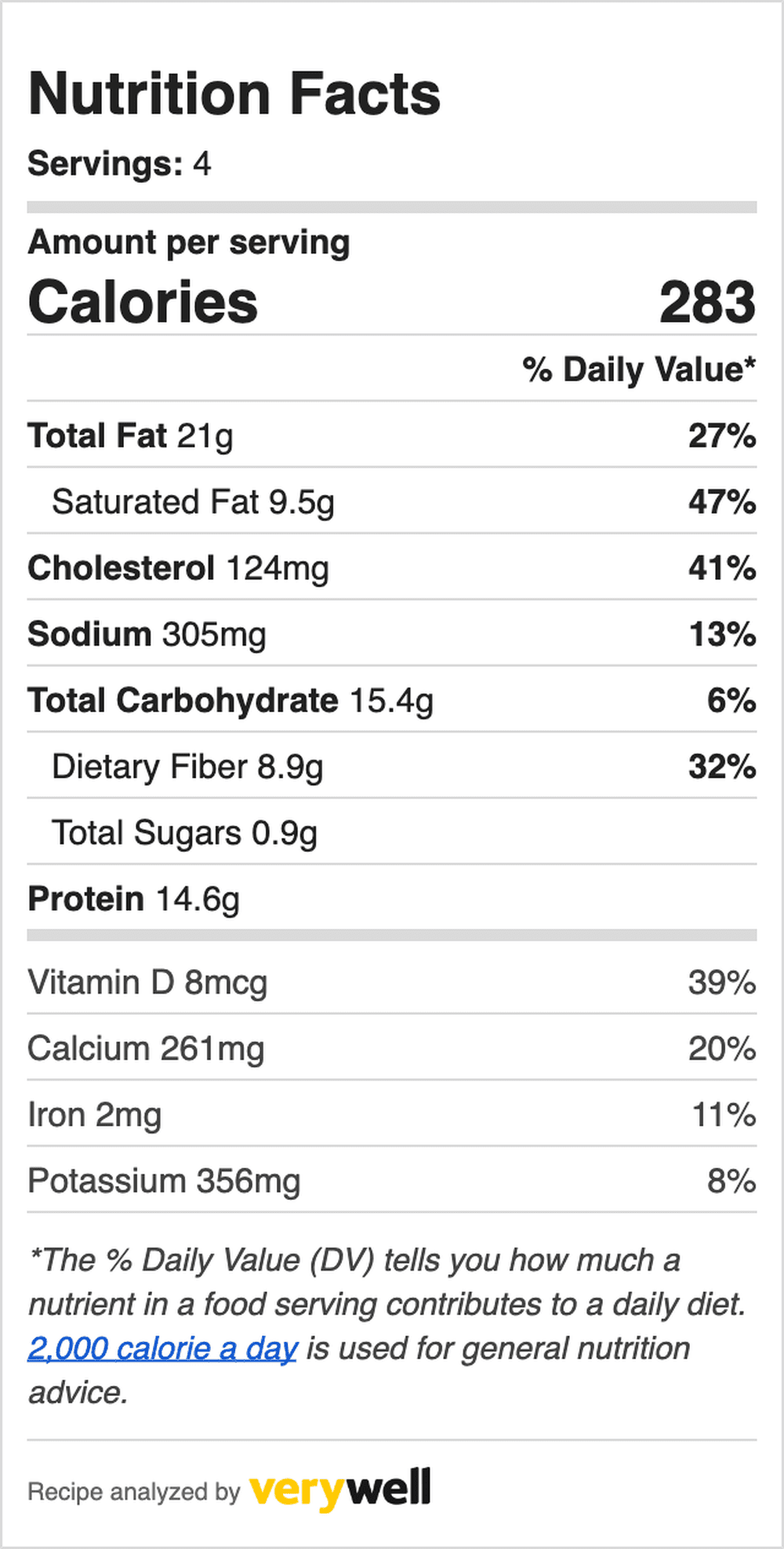 This is really an individual choice but this is what I do:

Mix the herbs and passata together in a small bowl. Spread this mixture on the three pizza bases right to the edge.  If the edges are well covered with sauce they shouldn’t burn.

Fry the chopped bacon, onions and garlic together in a pan until cooked.

Cook approximately eight minutes although I start checking them after five as you don’t want the edges to burn but you want the base to be cooked.

Cut each pizza into eight slices and enjoy!