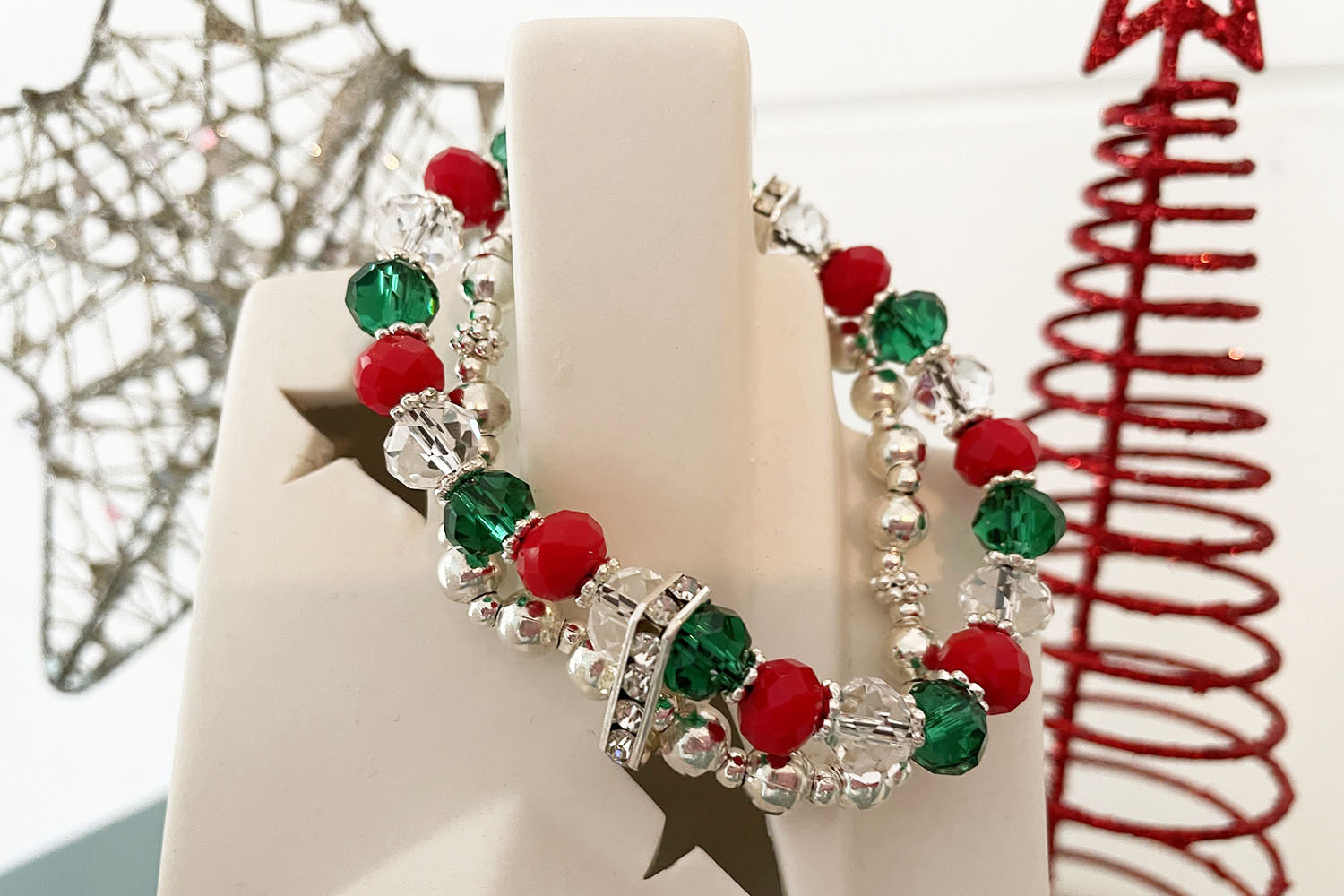 I also want to show you how to work out exactly how many beads you need so that both strands of your stretch bracelet are the same length.  This means that your two-hole spacer beads will sit perfectly straight on your wrist. There’s a bit of fiddling around to get it perfect but, believe me, it’s well worth the effort.

Here’s what you will need to make the bracelet:

Note: for demonstration purposes I am using black elastic so that you can see it.

The tools I used to make this bracelet are:

Watch the video or read the instructions below.

Cut a piece of elastic about 1 metre (or a yard) long. Fold it in half and pre-stretch it in sections. Give it a good stretch, moving along in sections so that it won’t stretch once it’s made up.  Thread the two ends of the folded elastic through the Big Eye Needle.  Place a bead stopper on the end opposite to the needle.

Thread the elastic through one hole of a Rhinestone Spacer Bar.

Thread on the beads in the following order:

Repeat three more times. It should look like this.

Add another of the two holed spacer beads, making sure that it is the same way up as the first – these spacer beads have rhinestones on only one side so you need to ensure they are threaded on the same way. Repeat the run of beads again.

Put the ends of the elastic into the bead stopper as well, leaving enough room so that you can still lay the bracelet out flat.

Here’s a chart of the beads I used, the quantity and the measurements.

What I discovered is that 6mm beads actually measured 6x5mm which meant that 10 of them only used up 50mm, not 60 as you would expect.  It always helps to measure.

Once I had added my 12 three millimetre beads, the strand only measured 86mm so I needed to add 2mm.  This is why I added the two 1mm beaded rondelles in the centre of each run. I could have added one more of the 3mm beads instead, but then it would have been 1mm too long.  I would have been OK with that but it also adds another design element.

Cut another piece of elastic 1m (1 yard) long. Fold it in half and pre-stretch it. Thread the needle on the two cut ends and place a bead stopper on the folded end.

Thread on all the beads, including the second hole of the two hole spacer beads, so that you have this:

Place the ends into the bead stopper, making the bracelet into a loop like before.

To ensure that the knot doesn’t come undone, I use a special knot.

First, remove the needle. Then remove the bead stopper from the folded end of the strand you intend to tie first. In my case, I did the coloured strand first.

Thread both of the cut ends through the loop at the other end of the strand.

Pull everything up nice and tight. Split the cut ends and thread each end, one at a time underneath the beads and through the centre of the bracelet, so that they cross. Bring the ends up, making sure that the slip between the beads where the loop end is.

Now bring the ends up and tie two knots, making sure that the knots sit in the same place.

Repeat the last two steps, threading through the bracelet, crossing the threads and then tying them off. Pull everything nice and tight, then cut the remaining ends off at about 2mm from the knot. This is what the knot should look like.

The knot will just disappear into the beads. If you still feel insecure about the knot, you can add a little dab of glue onto it and pop it inside one of the beads, but I’ve never had one of these knots fail on me.

Repeat the same knotting process for the second strand.

I really hope you enjoyed making this stretch bracelet with me. This is my last post for 2022. I'm taking a short break and I'll be back in 2023 with lots more fun ideas.

PIN THIS FOR INSPIRATION AND SHARE WITH YOUR FRIENDS!!