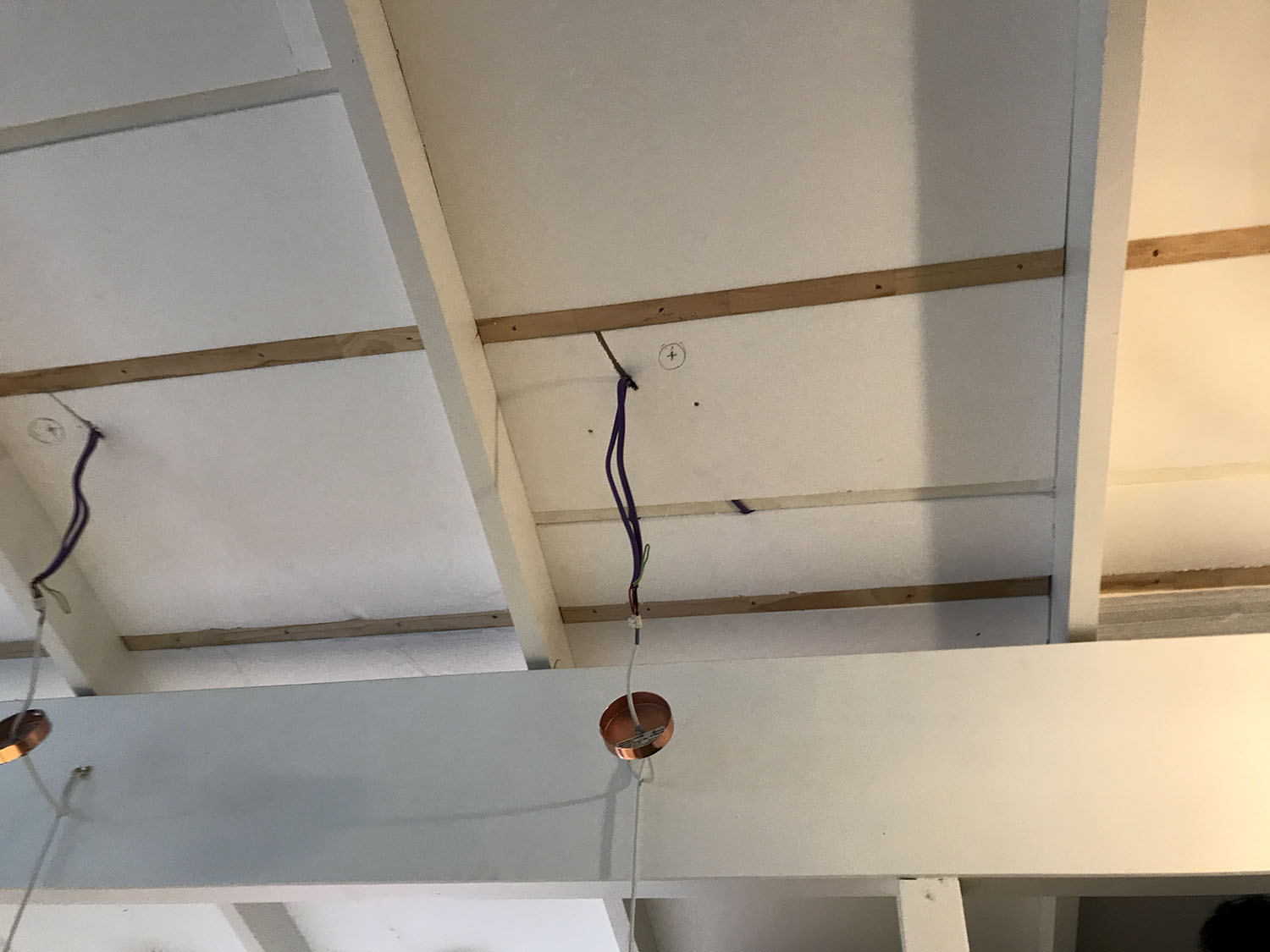 We have beautiful beams in our house – and no insulation (in the ceilings anyway) - until now. Because we have no roof cavity, we’ve pondered the best way to insulate without losing any of the beams.

First, we sought advice from Lockwood –their suggestion was to take off the roof, lay the insulation and reroof.  Reroofing is not in our budget right now, sowe had to find an alternative solution.

Next, we talked to an insulation specialist.  His advice was much more practical,and we decided to go with that.

These photos are ‘in progress’.  There’s no big reveal.  It’s actually not quite finished yet, but we are getting there.

Make no mistake, this is a major undertaking – one that we decided to get help with.  Our friendly neighbourhood builder did the main bulk of the work and we are doing the plastering and finishing – which is why it’s not finished yet.

I wanted to share this with you because I’ve had people asking me how to do this and what the results were.

I can tell you that the results, as far as loss of heat, have been amazing.  We have only done half of our house, but we have noticed that half of the house is much warmer than the rest.

We decided that, as a tradeoff, we could afford to lose 33mm of our beams – I was worried that you would notice, but honestly, you don’t.  In fact, even though they are not finished, they look way better than they did before.

Let’s take a look at what they looked like before.

Remember all those purple wires I showed you here?

Those wires were purple for a reason – you need to use the purple wire so that it doesn’t corrode the polystyrene overtime.

Our builder added 20mm slats across the panels between the beams. As our ceiling is made from chipboard, it will easily hold this weight, and the weight of the plasterboard.

Our initial plan was to run these slats upthe sides of the beams as well but we decided not to do that.  You’ll see why soon.

We chose 20mm polystyrene.  I was really surprised at how little thiscost, which is always great news.

He tucked it very tightly right up between the beams, trying his best to make tight seals.

To accommodate those purple wires so that the plasterboard could sit flat, a small trench was carved in the polystyrene.Below is a photo of the wires where they were taped, prior to being popped into their final resting place.

The next step was plasterboard.  This took a bit working out to get it right.

We used 3m long boards and he laid them lengthwise in between the beams. This worked out to be the most economical use.

You can see here, he had to do a little bit of patchwork to fit into the shorter spaces.

Remember I said that we decided not to run the slats up the sides of the beams – well, we decided to make a feature of them.  The actual reason for this was to get abetter finish with the plastering. We put them on the outside!

Yes, that’s right.  We put the structural, necessary wood on the outside and it looks great.

I actually saw this on a Youtube video of a Sarah Richardson makeover and I loved the idea. It just adds an extra layer of detail it adds which works perfectly with our whole house – a Lockwood is all about the detail.

I've also been told that plaster right up to the beams can crack so this just seemed like a good idea.

So, here’s the big, not very glamorous reveal.

Don’t worry, once it’s all painted and finished, it’s going to look great.  I actually think it looks amazing even though it’s not finished.  If you compare the before and after below you can see the change is quite dramatic.

Image what it will look like when it’s all painted.

I hope this post has been helpful to someone who is dealing with a similar issue. Leave me a comment and let me know if you do this to your house.

UPDATE: If you would like to see the finished kitchen click here. For more updates on the renovation, check out the Renovate section of my blog.