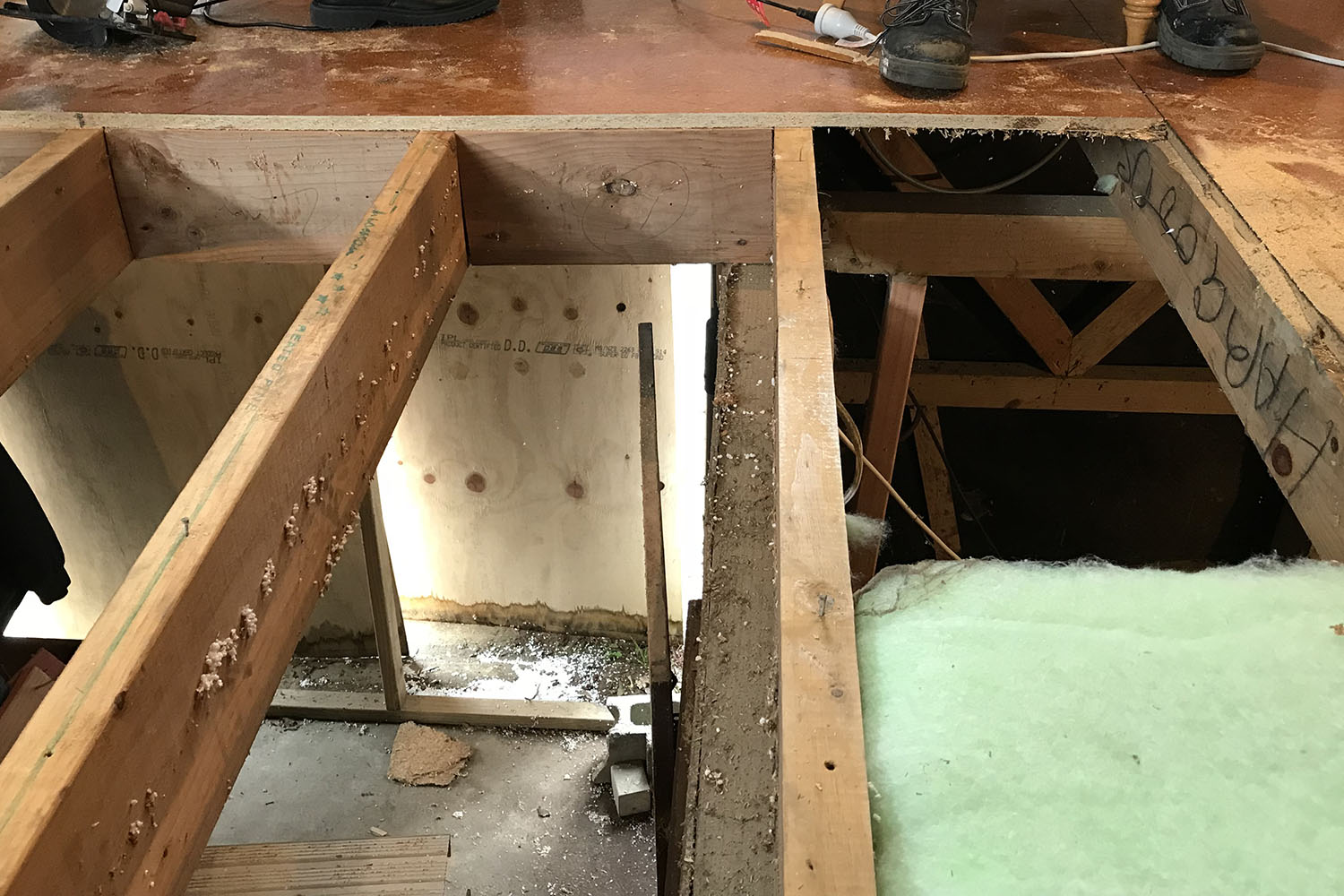 This one is not going to be pretty! The floors throughout our entire house were a mess but the kitchen was by far the worst.

You may remember my post about our rollercoaster floors.

In that post, I didn’t go into the details about how we fixed the problem, so here goes.

The floors were made of chipboard (aka Weet-bix). Chipboard was commonly used in the 1960s and 70s as a building material, especially for floors.  Our entire house had chipboard floors and ceilings. The reason builders refer to this chipboard as Weet-bix is because when it gets wet it swells up like a Weet-bix (breakfast cereal made from flaked wheat) which absorbs an unusually large amount of milk.

We are systematically replacing them all throughout the house.  There were a couple though, that couldn’t wait. The laundry was literally mush – we needed to New Zealand's leaky homes regulations, the new flooring couldn’t be installed until the floor was replaced.

We also had to replace the floor in our hallway and hall cupboard because our hot water cylinder sprang a leak and the floor boards swelled up and practically disintegrated (also another story).

Our kitchen floors also suffered from a large amount of swelling but the main problem was that they were uneven.  It became apparent when we removed the wall between the kitchen and lounge why they were so uneven (read this if you don’t know why) but once we removed the floor we realised that wasn’t the only problem - the joists were made from different grade timbers, meaning that they weren’t all the same size. Basically, one joist was sitting about 5mm lower than it should have been and the other one was sitting about 10mm higher than it should have been.

Now that we had the floor ripped out, we needed to think fast about how we could rectify the problem which was two-fold.  We needed to add a joist under the post that supports the beam that holds up the ceiling, and we needed to fix the uneven joists.

We actually removed the floor in two parts, simply because it made it easier. Before we did that though, we need to support the roof so we had to jack up the roof with some panel lifters – that took the pressure off so we could  take out the post and put a joist underneath it.

Next we removed the small piece of wood holding up the post and put in a joist.

How did they ever think that tiny piece of wood was going to hold up that huge beam?

After the joist was in, then we could focus on getting the floor even.

I’m sorry but I don’t have any photos of what we did here – we were too busy getting it done to remember to take photos.

Andy was happy that he got to buy a new toy – a new planer.  He had to use a chisel to cut some of the high one away and then used the planer to do the last bit.  It took a while, but he got there in the end.  While he was doing that, I was assembling the flat packed kitchen cabinetry.

With the low joist, we packed it out with some moisture barrier strips (sorry I don’t have a link but if you really want to know what we used, leave me a comment below and I’ll find out).

With this done, we put down some 25mm tongue and groove structural flooring plywood as a subfloor so that our wonderful HanWood floors could be installed over the top.

In the photo above, you can see that we also had to plane and sand the existing floor tiles so that they matched the height of the new floor. Basically, we just made the floor as even as we could.

The final step in the process happened after we had installed the kitchen – the fun stuff.

We installed wonderful HanWood floors. The colour we chose was called Hyde Park because it’s a soft grey which worked perfectly with our colour scheme and other flooring in our house.

This is a really cost effective way to get a great floor.

If you would like to see more of my kitchen then check out the reveal video.