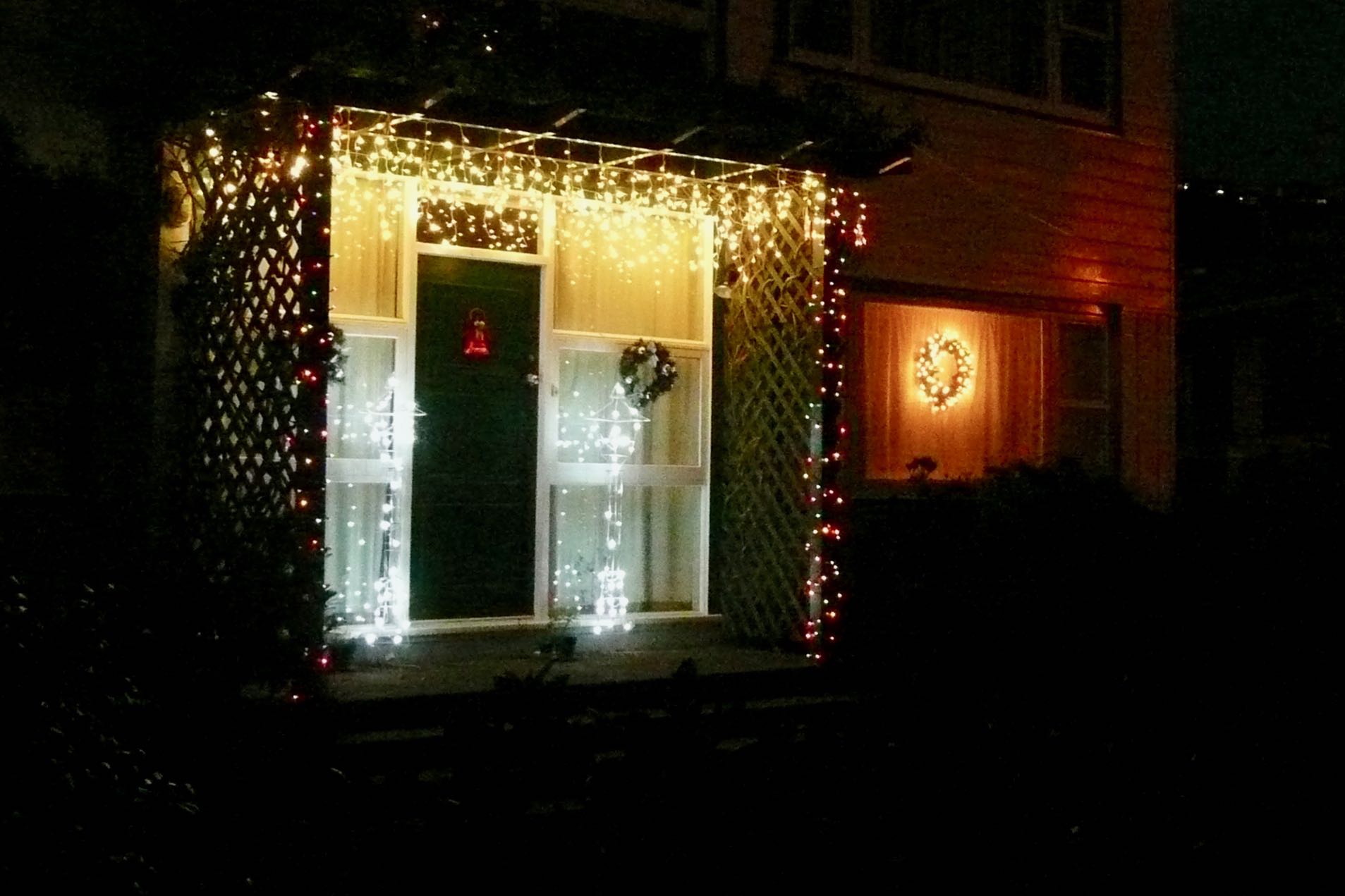 Andy is mad about Christmas lights and always puts them up so this year is no exception, even though we are living in rented accommodation which we may have to leave at a moment's notice, he spoke with the landlord weeks ago and confirmed that, even if the house sells, we could stay until Christmas.  That was enough to get him excited about decorating.  I must admit, this year I have had the time and energy to get involved as well.

Our house is very tall, second storey is way too high to hang lights up there so they were limited to the ground floor.  Having said that, I think it still looks very pretty.  Here are some photos.

You will see that we have two lighted lamposts on either side of the front door.  These were such a bargain, purchased from Ezybuy for $39 each (down from $99).  I got the last two in the country!

Andy also hung four, yes four, rows of lights under the pergola and lights in the tree (which you can't see in these photos).  The wreath is one I bought with me from Canada.  Unfortunately, the lights wouldn't work here (worked but got very hot - didn't want to cause a fire), so one day I sat down and rewound the whole wreath with new lights.  It made me think that anyone could do this.  It's just an ordinary green wreath that you can buy from Spotlight and I wound the lights in and out of the "branches" to hide the wires.

Being greedy this year with two Christmas trees.  The reason for this is that we have this really great upstairs window and I wanted to display something in it - what better than a tree.  You'll have to excuse the laundry shelf in the background - that's a whole other story.  This is the red tree and it's fake.

We decided to get a real tree for the lounge.  You'll note that NZ Christmas trees are nowhere near as uniformly shaped and pretty as the Canadian ones.  We also forgot that Andy is allergic to these trees so there's been some sneezing going on.  I think I'll have to invest in a really good fake one for next year (the red tree isn't big enough).  This one is decorated with the silver decorations we bought back from Canada and used on last year's tree.

Lastly, and certainly not least as it took me ages to find and a pretty penny to purchase, I wound the staircase with a garland from Kirkcaldie & Stains (very expensive department store), adding silver balls purchased from The Warehouse for 50c each.

Must say, I've enjoyed decorating this year.  The last few weeks have been all about decorating, the early part of this week has been about buying presents and from now on, it's all about cooking.  Hope you enjoyed this little tour.